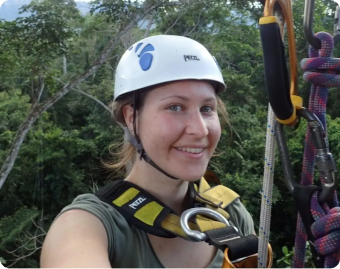 Path finding in the academic jungle

When it came to choosing what to study, I had it easier than most—I’d had a clear idea of what I wanted to do since I was eight. I wanted to study zoology and work as a herpetologist in the rainforest.

As an eight-year-old I learned that a herpetologist studied reptiles and amphibians to help their conservation, discovering new species and exploring wildernesses. I was hooked on the idea ever since.

How I chose my university

I live in Scotland so I decided to stay here for university for financial and personal convenience. In choosing what to study and where, I really only had two sources of information: the school brochure and an open day visit, so there wasn’t a lot to go on. It would have been useful to talk to someone who worked in my area of interest and was in the early stages of their career to get some recommendations on what to look for in a course. However, careers events usually cover a fairly narrow range of options and zoology tends to be overlooked. After comparing all the universities that offered zoology and environmental courses, I settled on the University of Glasgow. I chose Glasgow partly because it was beautiful, but also because I’d read that there were opportunities to participate in overseas expeditions to gain real-life zoology experience.

As soon as I started my course, applications opened for the Exploration Society’s summer expeditions. There was one to the Amazon rainforest in Ecuador, studying frogs and birds—I had never wanted anything so badly before! Though usually a reasonably confident and articulate person, when I had my interview to join this student expedition and was asked ‘what could I bring to the team?’, as a young, first year undergrad I couldn’t think of a single reason why I could possibly be worthy of this opportunity. After ten minutes of awkward empty chat I finally left the interview, knowing I’d blown it. I thought of all the things I wished I’d said, and wrote a note on some scrap paper listing all the tiny contributions I could bring to the team, which I taped to the door of the expedition leader’s office.  My desperate enthusiasm somehow did get me a place, and I owe a lot to being given that chance.

The expedition was an amazing experience: we went out searching for frogs in the middle of the night, found beautiful but deadly vipers on our trails, travelled in canoes and slept in hammocks. At the end of the expedition I was convinced this was the career for me and I would have happily lived in the jungle full time. I took part in a few other expeditions and extracurricular activities during my undergraduate degree, and through these I learned valuable skills in planning, logistics, organisation and above all teamwork, as well as the technical skills required for wildlife surveys.

When I finished my degree, I was set on staying in academic research, so the next step was to get a PhD. While working on this plan, I got a job at Edinburgh Zoo, working in the giant panda department where I provided visitors with educational talks about the conservation of this species. Pandas can be very entertaining, when they aren’t asleep, but I had never realised the strength of emotion they could trigger in people; a few even burst into tears upon seeing them. A year or so later, I saw an advert for a field assistant position on a conservation project in the Amazon rainforest in Peru. It was my dream job, and I was lucky enough to get it. I was working as part of a very small team, often getting up at dawn for bird surveys and finishing with frog transects near midnight. It was amazing, intense and exhausting—and I loved it! But it was badly paid, and it wasn’t really feasible to fly back for family visits. When my contract finished, I came back to Scotland, but was soon eager to get back out to the rainforest.

When looking for PhD’s, I primarily searched the FindAPhD website, but many positions get advertised through informal routes, such as mailing lists and social media, and it often is a case of hearing about an opening through people you know. I continued applying for PhD positions, but kept being told that the other candidates had master’s degrees, so I couldn’t really compete. I finally decided to bite the bullet and accept that I would need a master’s (and a painful loan) if I wanted to pursue my chosen career. There are an overwhelming number of master’s courses out there; finding the right one usually involves trawling through the websites of each university and picking a title that sounds fitting, or following the recommendations of a friend. In my case, I went for the easy option of going back to my alma mater, where one of my previous teachers recommended a course that had been recently introduced. I had loads of practical experience, but not a huge amount of statistics knowledge, and this course would help fill that gap. I figured I could just go back there, get a master’s, tick that box and I’d be all set. I’m very glad I did— the course was excellent; it was much more interesting and challenging than I had expected and provided a solid foundation in statistical modelling and computer programming. One regret I have is that I didn’t prioritise math and statistics earlier. These subjects can open so many doors and really are fundamental to many aspects of biology and science in general, which I hadn’t really appreciated before then.

Usually in academia, you are expected to move around a bit, building networks and learning new skills in different departments. When I finally found a suitable PhD position, I heard about it through informal networks, from people I had worked with previously, as is often the case. It turned out to be based in Glasgow again, working with the organisation in Peru where I had worked as a field assistant. I had the benefit of already knowing my supervisors and the study area, which helped with planning the study design and logistics. My research was on how different groups of animals respond to human disturbance and how we can measure these changes. I was also interested in how changes in these wildlife communities could impact the functions they perform, such as pollination and seed dispersal.

The PhD was tough. It gave me a new appreciation of the importance of looking after the mental health of both myself and those around me. It was also very exciting to be in charge of my own research, to have the creative space to come up with new ideas and try them out, and to spend extensive periods in one of the most amazing places in the world. I caught hundreds of species of butterflies, found frogs that still hadn’t been scientifically described, had close encounters with jaguars & pumas and worked with some fantastic people. I also fell into muddy swamps and had parasitic flies burrow into my skin, but every day in the jungle I saw something that I had never seen before. However, the reality of working in the rainforest and for an organisation besides my university meant that there were a host of factors out of my control that made getting reliable data and a solid study design challenging. I did make it through, but it was difficult in ways I hadn’t anticipated.

After that I wasn’t sure if I wanted to stay in academia – I love research and the creative environment, discussing exciting ideas with colleagues and having lots of space for learning. But at the same time, it’s very unstable and it is often necessary to frequently move to a new department and even country, chasing short term contracts. I applied for a mix of academic and non-academic roles, and ended up taking a position in the public sector. I worked on peatland restoration – a big climate change initiative in Scotland. It was satisfying to work in a conservation job where you could see the impact directly. I worked with a great team there, but after a while I decided it was time to find some new learning opportunities.

I moved on to my current role as a statistician working in international development, hoping to have more space to grow. I am only a small part of a large network working on providing evidence and shaping policy to achieve sustainable development globally, but I find it rewarding that my work feeds into changes that can have huge impacts. A few weeks after starting this job, I was offered an academic research opportunity to work with a team I had tremendous admiration for, but I was already excited about my new job; personal circumstances also made me reluctant to move away from my family.

It was a strange moment in my career to decide to stop chasing what I had always thought I wanted most. I value having an interesting and meaningful job, but I also place high value on my working conditions, being empowered and treated with respect, with space to develop and the flexibility to fit my work around the rest of my life – things that I had never considered earlier in my career. I believe that while your choice of study or career path is important, it neither defines nor confines you: whatever you study, there will be opportunities to develop the transferable skills that will give you enough wiggle room to change paths further down the road should you wish, so keep that in mind and enjoy the journey.

Laura Allen is a statistician with a PhD in tropical rainforest ecology. She is based in the UK and works in international development with a focus on sustainability.